This year marked the 20th anniversary of Community Art Center’s Do It Your Damn Self – the longest running solely youth-led film festival in the country.

The festival is a product of Community Art Center’s Teen Media Program. Established in 1970, the program continues to inspire and empower teen storytellers to move forward with self-assurance and dignity, living out the motto and mission of “if you want something done, you gotta ‘do it your damn self!’”

The festival  featured a diverse array of films with wide reaching subject matter. All the same, staying true to the original mission of the six founding teen members to, ‘make change in their communities’, themes of social justice served as a through line in multiple films.

The film #BlackLivesMatter knit together images of the harsh realities of police brutality cases in recent years and the social unrest that has given rise to protests. Similarly, hip hop music video Pain highlights a young African-American male’s perspective on police brutality. Reach, an experimental film, takes viewers inside the reality of just existing as a black person in modern day America while Fault Lines speaks to how students can easily slip through the cracks of the education system.

Reach from YouthFX in Albany, NY.

Issues of representation in the media were featured as well. The film Tokenized follows Maggie whose life is changed when she is cast as a token character in her white male best friend Spencer’s story. As Maggie adjusts to life in her new role in Spencer’s story, she becomes more aware of how the unjust “storyboard system” has negatively impacted not only her life but that of her fellow token allies. The film brilliantly ties in LGBTQ issues when a character cast as Spencer’s love interest shows interest in Maggie instead. Eventually, along with her new love interest and other ‘tokens’, Maggie confronts the system eventually flipping the script and gaining her due agency in the process.

Other films addressing media representation included The Seated Siren and Life Rolls On.

The films (narrative and documentary respectively) touch on what it’s like living with physical disabilities. In The Seated Siren, the heroine struggles with the dating pool being seen as an invalid rather than as a person with feelings. Life Rolls On highlights Danny whose life was forever changed after enduring a sports accident. The film emphasizes how Danny is actually not a victim and instead, consistently continues to conquer life and its obstacles each and every day.

By the Way, by St. Stephen’s Episcopal School, Austin, TX

The festival also had its share of incredibly innovative storytelling. The film By The Way features a love story with a young couple who forms a bond over scribbling doodles on their shared desk. Finally, Mindful has a unique take on the issue of mental illness with a student personifying anxiety, depression, negativity and happiness and placing these characters into a police detective action narrative with a comedic twist.

All of the films in their own way offered an inside look at the humanity of a variety of hot topic issues that can often be difficult to fully understand when thought of at all. They were also a reminder of the arts’ power to connect people and create a space for discussion and ultimately understanding.

Congratulations to all 2017 winners. 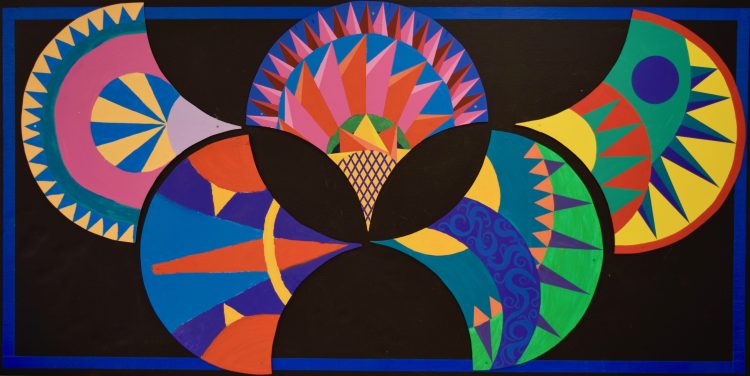 Express Yourself mentor, Nic Bennett, has been hard at work completing his large scale exhibition funded by an Amplify Grant from the Mass Cultural Council.

Nic is an Express Yourself participant of 16 years and a long-time youth mentor –  the longest running participant in Express Yourself history. He is leading youth and junior mentors in creating two large panels inspired by the theme SOUL to be displayed outside Express Yourself’s studio. Using quilting patterns and a specific color palette, Nic designed a modular project to be individually painted by youth and then assembled into the final piece.

His project fosters youth leadership within the studio setting and brings public art to the Cummings Center in Beverly, MA. The exhibition will be presented during a studio reception and will be on full display in the Cummings Center after the show at the Boch Center Wang Theater on May 25. 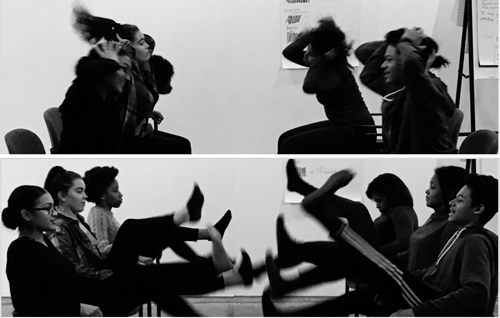 “The way one performs something is a creative act in itself. Watching our group grow and push each other as performers is amazing. The piece is about reflection. How do we see others? How do we see ourself in others? We are working out ways to use mirrors as props and tools for to share and explore this idea with the audience during our dance,” said Teaching Artist Mary Teuscher.

Work in Progress: The Imagined City from Urbano Project on Vimeo.

Last month, the MCC proudly presented Springfield’s SciTech High School Band with the 2017 Commonwealth Award in Creative Youth Development, for providing Springfield’s youth with opportunities to experience music and to give back to their community by sharing their joy in its creation.

Artists for Humanity celebrated Black History Month on Instagram by highlighting local legends: people they’ve mentored, been mentored by, or who have enriched the local community with their talent and energy. Here are a few of those featured paintings: 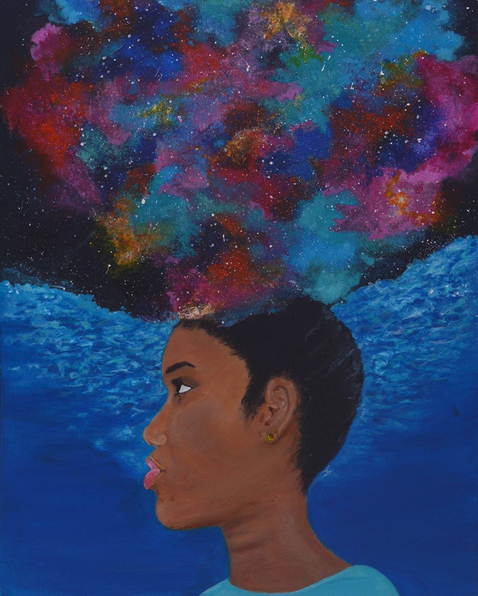 “This was my second painting at AFH. I tend to focus on realism and my ideas are based on things that I’ve faced. This painting represents the power of knowledge; how knowledge helps you expand out of your boundaries and grow as an individual,” Erica Orsorio, youth artist with Artists for Humanity. 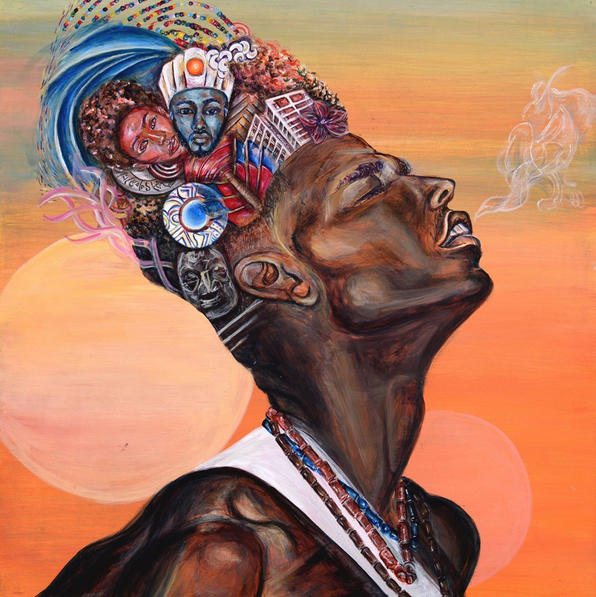 “My art resembles and is influenced by the mental and physical restraint that people of color face in this world. I usually try to make connections to my life and my Haitian ancestors, as well as the struggles of people of the African diaspora all over the world. I encourage and embrace black power, it is evident in my pieces,” Adriana Dalice, Artists for Humanity Alum. 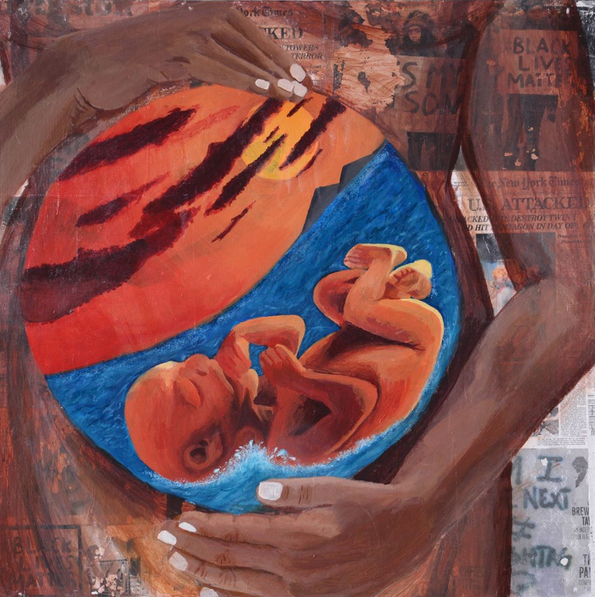 Take a journey through the eyes of teen artists from the ICA’s nationally recognized Teen Programs. The exhibit ICA Teen Photography (through October 30, 2016 at Boston’s Institute of Contemporary Art) features new works made by 16 Boston-area ICA teen participants. Throughout the school year, participants in the museum’s rigorous digital photography courses learned to use museum-issued cameras, and established positive relationships with peers and the professional artists and educators who led the classes.

When asked what he looks for in a photography subject, Edward Tapia, a teen whose work is featured in the exhibit said, “There are certain things that seem attractive to the eye as it is, but honestly, anything can become attractive and interesting if someone looks at it with a different view. I try to turn things into outstanding compositions with photography, so I look at things in a different way than usual and capture what seems interesting about it to create even more.”

“One of my biggest take-aways from participating in the Teen Programs at the ICA is to learn to appreciate art and discover the meaning behind it, and then apply them to my personal life.”

Krystal Cai, another teen whose work is featured in the exhibit said, “One of the biggest take-aways I have from participating in the teen programs at the ICA is a clear understanding of the basic technical features of the camera, which I think was a valuable lesson for me as a beginner. Also, this program taught me do not ever delete pictures, because you can always look back at your previous work to see how you progress and learn areas for improvement.” 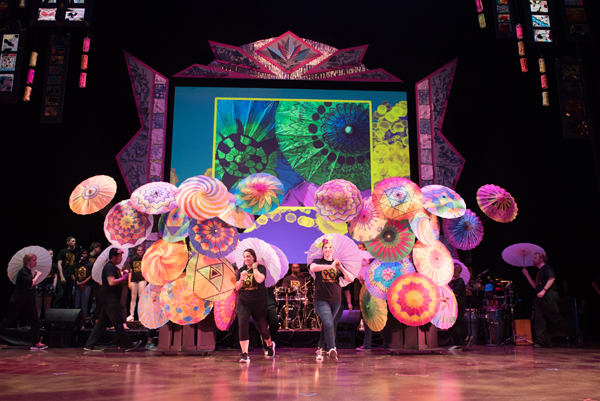 Amplify, MCC’s grant program created to support youth led and designed projects, is starting to bear fruit, the first of which was the wonderful Pop-Up Parasol exhibit by Youth Mentor Rachel at Express Yourself (EXYO).

Following the pop-up exhibit, the parasols took center stage at EXYO’s annual showcase “Illuminate”. The parasols were twirled and paraded before a completely packed Wang Theatre in Boston, their intricate mandala-like patterns and joyous brightness  carefully choreographed into a dazzling performance by EXYO’s participants. 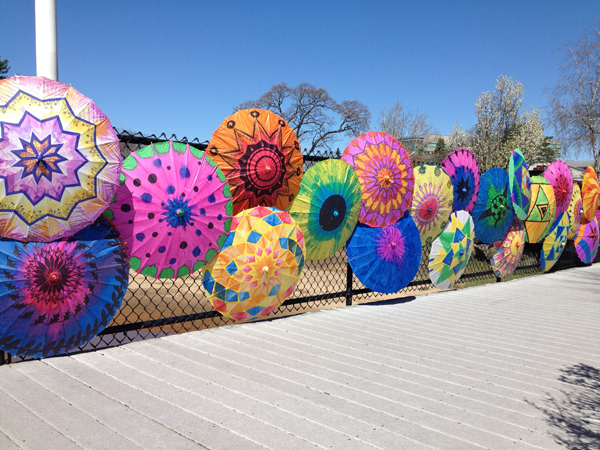 “The Amplify project helped us to focus on a unique opportunity to create a youth-inspired exhibition that engaged the community at-large”, said Paula Conrad, Co-Executive Director of EXYO. “The grant challenged Express Yourself mentors to define and push forth on an empowering and illuminating art idea, guided by Rachel.”

Amplify grants provide support for projects designed and executed by young people in programs that currently receive YouthReach or SerHacer funding. This year $11,440 was awarded with each grantee receiving up to $1,000.

The middle-school aged filmmakers in Raw Art Works‘ Real to Reel program have created a fantastic, shot-for-shot, gender-reversed remake of the trailer for Ghostbusters (1984):

“They made their costumes by hand. Everything you see is 100 percent them,” said Chris Gaines, director of the Real to Reel Film School in Lynn, MA.

A full write-up about this project also appeared in Yahoo Movies.