On the Mass Cultural Council’s podcast, Creative Minds Out Loud, we spoke with Julie Lichtenberg, Director of The Performance Project, and Artistic Director of First Generation Ensemble.

This post was adapted from the a piece by Kim Phan in the Mass Health and Human Services Blog. 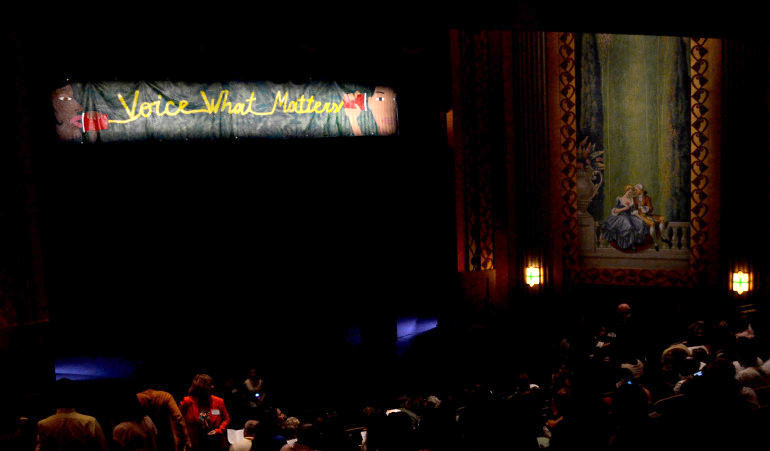 “Voice What Matters”, the banner above the stage read, and that is exactly what the youth of the Mass Department of Youth Services (DYS) did. From paintings to sculptures, to videos, songs and dance, young people showed who they are and what matters to them. This year the DYS held the 4th Annual “Share Your Art, Share Your Voice!” Statewide Youth Showcase on June 16 at the Paramount Center at Emerson College.

The motivation for the investment in the arts by DYS came about because, as Peter Forbes, Department of Youth Services Commissioner, said, “Many of the youth are not happy to be with us (DYS), so we have to try to figure out what they’re interested in and use that interest as a hook for the change process. Many of the youth have unbelievable artistic talent, but they often don’t have exposure to the arts to see that, so this is something the agency put forward.”

The showcase kicked off with a youth art exhibition, with the proceeds going directly to the artists. Walking through the exhibit, excited chatter of the attendees could be heard as they eyed the pieces they were going to purchase. “They’re going fast,” said one onlooker. “I know they always do,” said another.

A self-portrait on display that had sold within 15 minutes of the exhibit opening was entitled “Purple Stands for Loyalty.” The artist, Kevin, wrote in his description, “I feel good that I did this self-portrait. Purple is my favorite color.”

Another artist wrote this about her painting “Look Closely”: “Pretty much everyone has a different perspective, a different eye. For this, trees make me feel calmed down, like I’m in a forest alone.”

Following the exhibit, performing artists hit the stage. The performances, while entertaining, also highlighted the realities of life. A youth named Xavier gave a powerful rendition of the “Hath not a Jew Eyes?” speech from Shakespeare’s The Merchant of Venice, a performance which had the audience in thunderous applause. A story by a youth named Dion described the struggle of reality vs. perception, and what he called the “Levels to this Frontin’” meaning what the world sees on the outside is not always what it is truly like on the inside. A group of girls – Jessica, Clarisine, Cheyenne, Zorelys, and Irianis – performed a stepping routine with rhythms that resonated throughout the theater. 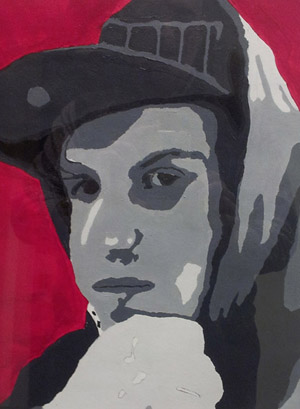 I bought this piece last June at an amazing art show at The State House sponsored by the Mass. Department of Youth Services. (“Tommy” is an assumed name, to protect the artist’s anonymity.)

The piece drew me from across the room because it was familiar—it reminded me of so many young men I see on the T and around my neighborhood.  I was also drawn by the drama of the color choices, and I was moved by the emotions revealed in those eyes.  I knew I had to purchase the piece, though, when I read Tommy’s simple artist’s statement:

“I was really intimidated by this project, but I finally finished it.”

Giving young people the opportunities and supports to succeed at things they couldn’t imagine they could accomplish—isn’t this what powerful youth development programs accomplish?  And in the arts, the added benefit is that young people produce a powerful connection with others, whether they know it or not.

Tommy was able to work through his fears to create something very strong and beautiful.  Now, hanging on my wall, I can look at Tommy’s work to encourage me to push through my own fears and get a difficult job done.

Thanks, Tommy, wherever you are.