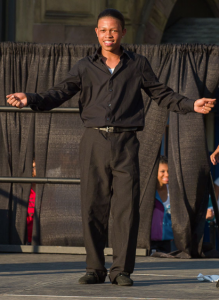 I arrived in Boston from the Dominican Republic when I was 13. No one told me I was going to a new country until the day before I left. When I got to Boston, I lived with my grandmother in a housing project in South Boston. I remember it was the end of November, and I didn’t have any warm clothes. I didn’t speak a word of English.

Right away I got expelled from school for my involvement in a fight. Fighting was a common activity for me. I had a lot of anger and the streets gave me a place to express it. I was the type of kid who, if I didn’t like the way you looked at me, there would probably be a fight.

Then, a friend of mine told me about a dance program at Hyde Square Task Force (HSTF).

Once there I learned Latin dance and began to feel more and more comfortable. I started to learn English. I still had anger, but people accepted me, and if I was in a bad mood, they took the time to talk to me. Soon, I was performing dance all over Boston, and I was surrounded with positive people – teens and adults. 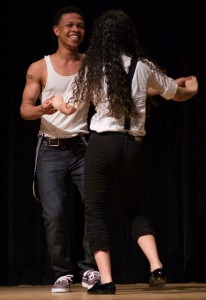 HSTF staff pushed me on my academics, but I still couldn’t graduate on time. The summer after 12th grade, my HSTF mentor worked with me and helped me complete high school. I started taking classes at Bunker Hill Community College, and a week into the semester, I had another incident on the streets. I was going to a party in the Lenox Street projects, and I got shot. I hit the ground to avoid a hail of bullets, but one of them caught my leg. Even though I lost a lot of blood, I was able to recover.

I realized I had to set my priorities straight, once and for all. I had to change my focus, so I threw myself into work, school, and dance.

At Bunker Hill, HSTF continued to support me through their college success program. They checked in with me every week. They even came to Bunker Hill and went to the financial aid office with me in order to get me the help I needed. I am in my final year at Bunker Hill. Next year I will attend Mass College of Art and Design to major in graphic design. Someday, my dream is to own my own graphic design company. Meanwhile, I dance. I am a member of the professional Mambo Revelation dance company. I also teach dance to middle school kids.

Published with permission from the Hyde Square Task Force.