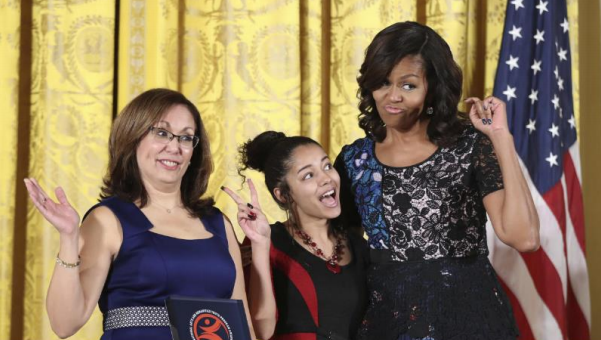 NAHYP recognizes 10-12 outstanding creative youth development (CYD) programs from across the country. It is the nation’s highest honor “for out-of-school arts and humanities programs that celebrate the creativity of America’s young people.”

This year, two programs from Massachusetts were recipients of the award:

“We believe that every single child has boundless promise, no matter who they are, where they come from, or how much money their parents have. And it is important to our continued greatness to see these kids as ours – not as ‘them,’ not as ‘other’, but as ours. And that’s really the power of programs like these. That’s the message that they send to our young people every single day,” said First Lady Michelle Obama during the emotionally charged NAHYP ceremony in Washington DC this week.

The NAHYP winners were chosen from 50 finalists from all around the country. Amongst the finalists were two additional Massachusetts organizations – Boston City Singers and BalletRox! – demonstrating just how much exemplary work in the field of CYD is happening within the Commonwealth.

The MCC is proud to support all four of these organizations. We salute them in this tremendous achievement.