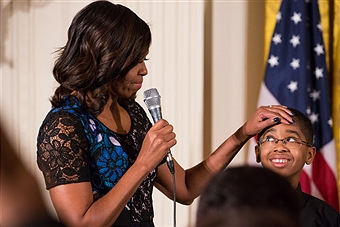 ICYMI, here’s an excerpt from the First Lady’s remarks during the 2016 National Arts and Humanities Youth Program Awards about creative youth development:

… Well, hello, everyone.  Welcome to the White House for the 2016 National Arts and Humanities Youth Program awards.  (Applause.)  Are you guys excited?  Let me start by thanking from the bottom of my heart, oh, gosh, so many people.  …

And to the entire President’s Committee on the Arts and Humanities — this is my team.  These are my people here.  I was just talking to them earlier — I mean, we have done some amazing things together.  It’s been a tremendous ride.  And, oh, I can’t tell you how much fun it’s been to just do great things for kids all over this country.  And I couldn’t have done it without you.  Thank you, not just for the work that you’ve done on this event, but for everything that you’ve done for the past eight years.

From the day we started, all of us, we’ve made it a priority to open up this house to as many young people from as many backgrounds as possible, because we wanted them to understand that this is their house too.  (Applause.)  And that’s not always the case.  There are kids all over this country, all over the world who think that places like this are not for them.  So they’re intimidated by it, and it defines the limits of who they can be.

Well, we want to change that.  We’ve worked to change that.  We want them to know that they should always feel home within these walls and so many important institutions all over the world.  At the same time, we also wanted to bring exciting arts programming to students across the country, and to get more kids engaged in the arts at their schools and also in their communities.  …

And finally, I want to thank all of the teachers and administrators, all the volunteers who make these programs possible.  Some of you are here today with us in this room, and many of you are watching and cheering from back home.  And as someone who used to be an executive director of a nonprofit organization, I know that you all are the unsung heroes of these programs, doing the unrecognized and sometimes unpaid work of making these programs work — filling out countless forms, applying for funding, attending endless meetings, going over spreadsheets and budgets in the middle of the night.

This kind of work is hard.  Too often it’s thankless.  But you all do it because you see firsthand the transformative impact that the arts can have on our young people.  And we’re grateful to you all for doing this kind of work.

Through your programs, students have become poets and dancers. They’ve become filmmakers and photographers.  And more importantly, they become leaders in their schools and in their communities.  They’ve written scripts and short stories.  They’ve organized performances and exhibitions.  And together, they’ve learned the power of discipline, of hard work, right?  And teamwork, right?

These are the exact skills that are critical to success not just in the arts, but in everything — every academic subject that you are going to touch and in any career that you guys are going to pursue.  So you don’t know how much you’re getting, but we do because we’re old.  We know.  (Laughter.)  That’s why kids who have gotten involved in the arts have better grades.  They are more likely to graduate from high school.  They are more likely to then go on to college.

But we’ve got a couple.  We’ve got Noemi Negron, who is here.  As recently as this spring, Noemi was a promising young woman growing up in Boston who wanted to serve others but didn’t know where to start.  But then she got involved with the IBA Youth Development Program, and she helped make a video project about women’s rights.  And today, she is a passionate advocate for social justice in her community.  That’s where you can go with programs like these.

We have a young man, Rafael Bitanga, who is here all the way from Kodiak, Alaska.  How was that trip?  (Laughter.)  A few years ago, Rafael and his family came to the United States from the Philippines.  And like so many young people who’ve immigrated to this country, Rafael worked hard in school and quickly established himself as a leader and a role model.  And through the Baranov Museum and Film Intensive, he became both a filmmaker and a photographer, and he even started his own photography business to help support his family.

So Noemi and Rafael, and — I could you about every single student or young person who is here today, but those are some of the stories that you’ll hear from them.  And I want them all to know how proud I am of them.  I’m proud of you guys, always proud of you guys.  You make this job worth doing, just having the honor of getting to meet so many amazing young people.

These kids represent the very best of America, and they remind us all of who we really are.  (Applause.)  That’s for you.  You can’t even believe it, right?  (Laughter.)  It’s all for you.

But we’re a country that believes in our young people — all of them.  We believe that every single child has boundless promise, no matter who they are, where they come from, or how much money their parents have.  We’ve got to remember that.  We believe that each of these young people is a vital part of the great American story.  I can’t say that enough.  (Applause.)

And it is important to our continued greatness to see these kids as ours — not as “them,” not as “other,” but as ours.  Because we want them to know that if they’re willing to work for it — and so many are — that they can be anything they want.  That’s what this country is about.  And we can never forget that.  Anywhere in the country, these kids are ours.  And that’s really the power of programs like these.  That’s the message that they send to our young people every single day.

So I want to end by once again thanking all of you — all the adults here too — (laughter) — for making these programs possible.  And I want to thank all of the young people for working so hard.  And don’t ever lose hope.  Don’t ever feel fear.  You belong here, you got that?  (Applause.)  Those people are clapping for you.  So don’t forget that — for all of you.  Remember that.  Remember that part of this day.  And keep working hard, because it’s going to be so important now to be educated and focused.  Because no one can ever take your education from you.  You got that?  Spread the word, you got it?  I’m looking at all of you all.  (Laughter.)